This morning, I’m having breakfast with my grandmother. She’s there in a dried rose that I plucked from her grave before she was buried. I know that life is an accumulation of little deaths that you need to tame, but this one needs time.

The start of summer 2019 feels so far away already and I want to remember the mourning I’ve already accomplished. Mourning with a capital “M,” with all its encapsulated feelings and steps, were lived so intensely one at a time. I was lucky enough to be there with her in the hospital during her final hours. She was surrounded by half her children (she had 12). We sang her the same lullabies she used to put us asleep night after night in her previous life as a mother and grandmother. She took one last breath that night in the arms of Jeanne-Mance, her daughter who is a nurse.

I came back from Trois-Pistoles in Montreal with my mother, just when school was out, and returned to Bas-du-Fleuve for an ancient burial service. I say that because back in our day, things weren’t handled so hastily, even when it came to mourning. We received a Facebook message with funeral arrangements and details, we buy flowers, we go to the salon one afternoon, we cry, often and a lot, and eventually we close the top of the big (or small) casket and we go home. I could be mistaken, and you can tell if I am, but I feel like we’re blazing through some steps.

For the first time, I had the chance to fully live out each moment of this test, but also bore witness to a tried and true system. In Trois-Pistoles, the lil man from the funeral parlour knew what he was doing. He also organized my grandfather’s service, buried him, and 20 years later, he returned his better half to him. In that time, my grandmother learned how to live on her own, write her own cheques, and drive. She also started bowling again. (It was during a healthy little competition that he collapsed.) Mrs. Lucien Rioux — a wife went by her husband’s name then — became Annette Beaulieu Rioux.

In the cemetery, the funeral director surprised us with a little gift: after we surrounded her with flowers, he delivered the final prayer of Absolution with the same stoup that married Lucien and Annette 78 years earlier. We each took our turns with the stoup, throwing a little jet of holy water with a smile. We thanked her for her tourtière, for her vegetable soup and her sucre à la crème…It’s just wild how it’s the simple things that just work. My cousin Simon even admitted that he was the mischievous one, the one who broke grandma’s bike. The sun was hot, we could have relived that moment all together. And that’s when I could smile a bit.

Since that intense day, I’ve gone through a roller coaster of emotions, very dark ones in fact, ever since I stepped into the same funeral parlour my mother had just entered. We offered misty-eyed hugs. The family, which was once spread out, what suddenly so closely tied to us, as were friends from the small town who were here to see off Annette. Forever the sullen one, just like my grandfather was, I hid in the funeral home’s kitchenette and sought out some much needed solitude. I needed to settle my nerves.

I reentered the world when my cousins were preparing to transport the casket to the hearse. “Wo! Wait a minute!” I screamed. Everything was moving too quickly for me, my mom and my aunts. After some very heartfelt goodbyes, we walked together on the other side of the street, towards one of the most beautiful churches in the province. I was bewildered, angry even, that life just ended this way. It all comes full circle, doesn’t it!

A funeral service is long. But it’s just long enough to get you from tears to some kind of peace. My daughter Stella chose to record the song Le voyage from Poulenc. It was incredible. My cousin Mikael’s piece on our heroine also soothed me. Everyone put their hearts in it and that church was filled with love.

The next day, we found ourselves reunited as a family. For the first time in a long time, we organized a small Rioux gathering. Weirdly enough, the year before, we all promised each other to get together Saint-Jean weekend 2019 to celebrate grandma’s 96 birthday. Annette decided to leave just before that, to avoid being the centre of attention. She always was no matter what, though. The day before, we were at church crying over her, the next day we were on a patio, at sunset, celebrating her life. We had already reserved the hotel rooms and plane tickets for those of us travelling from Saskatchewan and the US. We prepared the menu for the reception, the music, the slide shows. She was there in spirit, in her lineage, right down to her great-great-grandchildren. Annette had carried all of us in her arms, but that night, it was our turn to carry her within us. 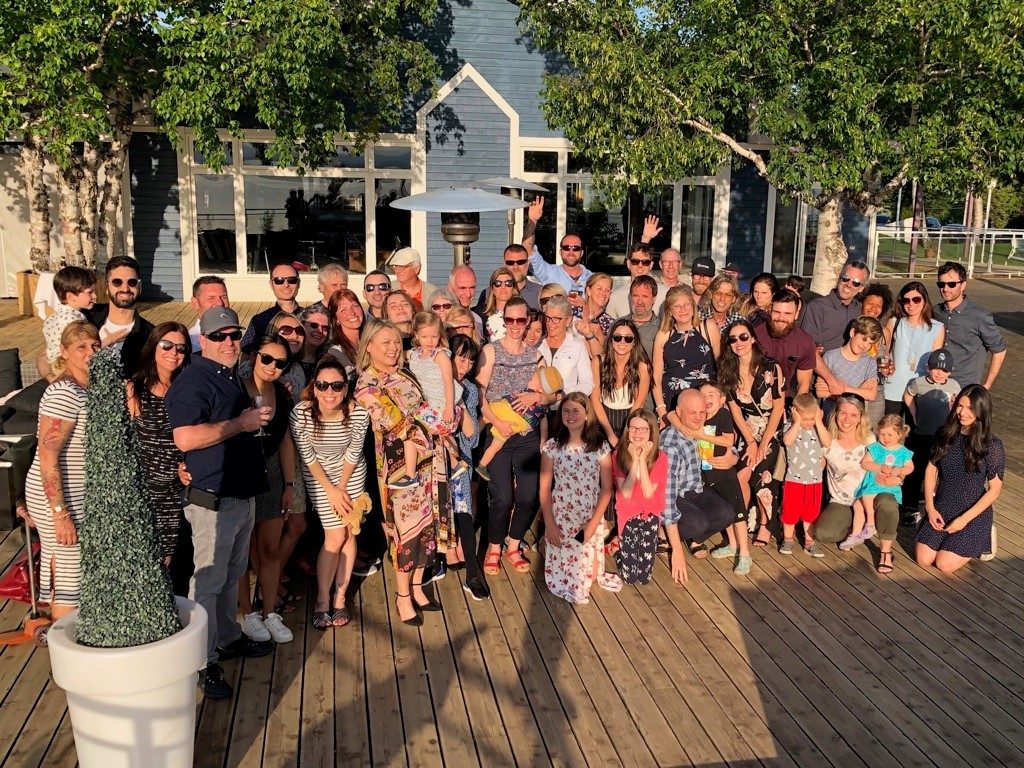 This morning my rose is just as fragile as life, fragile like my heart. But to this rose I say: thank you.