I was so obsessed with the fashion world as a teenager that I drove my friends nuts. I read Vogue and dreamed about inhabiting the wonderlands on those pages styled most memorably by Grace Coddington. I once stared at a black and white photograph by Patrick Demarchelier in Harper’s Bazaar for ten minutes because I was so blown away by his talent for unusual framing. I read Anna Wintour’s Letter from the Editor religiously and was continually impressed that she could make fashion sound as important as politics, if not more so because it reflects our times, it reflects our now, and therefore the constant change is necessary.

I knew every model by name and hoped that one day I would have their life. I tried to be a model but no matter how much weight I lost, they told me I had to lose more. I gave up and chose food. I refocused and in college I studied acting for four years. I loved the challenge of the work; combining my imagination with the playwright’s incredible language. I loved telling those stories and inhabiting other times and countries I had never seen. I loved how a character could be developed and then the costumes would nudge them one step closer to life. I loved the drama of opening night; that your final rehearsal was always a disaster and somehow it all came together that night, as if by magic. My heart would pound in my ears. I gave up that career too because I didn’t have it in me to deal with the constant rejection. It was not an easy decision. I think I broke my own heart to save it.

Throughout my teenage years I would dream of glittering parties in far off places like Paris and get so excited for “one day” that I would drift off to sleep on a high. I always did have a very active imagination.

Fast forward to me studying Communications at University. Once I graduated, I bought the equipment we used in photography class and had a brief stint as a fashion photographer. This time, I couldn’t get my head around the cost of the equipment and eventually I moved on to get a “real” job.
I have since learned that living in the “real” world may be practical, and you can take the girl out of fashion and theatre; but you can’t take the fashion and theatre out of the girl. Once they wiggle their way in, they are there for life. They are a part of who you are. They call out to you like a siren song, and they won’t be ignored. That passion must be tended to, even if how you give it a voice changes.

I have a talented friend who has dedicated her creative and professional life to fashion. She has a singular devotion to the workmanship of the clothes and to sustainability. She has been the designer of her own beautiful lines. She moved to Paris a year ago and made it for 8 months with her husband and two children. It’s a very expensive city. She started a career as a streetstyle photographer during this time and found her calling. She figured out the ropes. She figured out how to find the fashion shows (locations are kept secret unless you have a ticket) and how to navigate the Paris subway system (this astounds me, have you seen that map?). Travelling with her was always a dream we would talk about in our twenties over too much red wine… until one day became the day. Her and I spent last week gorging on fashion at Paris Fashion Week. Running our feet off from show to show to photograph the show before the show.

The Dries Van Noten pre- and post-show with a recap from Tim Blanks.

The spectacle of the pre-show is a taste of theatre for me. Ticket holders run in like very late colorful rare birds and the photographers hunt for the shot. By the time you are sure that everyone has entered, the show is already over! Then they file out importantly and more pictures are taken. It’s a bit of a circus at times, especially if a rock star or super model show up. The cops do not mess around. My feet are still bruised from being stepped on multiple times, and I have PTFD (post traumatic fashion disorder) from being pushed by a barricade as I laughed at the absurdity of the situation; but I want to be up close to the action, and that’s the price.

It’s definitely a strange voyeur-like feeling to stand around waiting to photograph strangers, but its unthinkable for me not to. It’s part of the game that we are all playing. As Karl Lagerfeld says, “Fashion is a game that has to be played seriously”. What’s the point otherwise?

I wish for the sake of my wallet that it had just been alright, that we had had a miserable time. But, I can’t say that. We got into an after party and danced all night to the best DJs I have ever seen.

The Jacquemus after-party by night and Dior pre-show by day.

We saw everyone. It was a daily buzz. The clothes, the hair, the accessories – O MY! And the theatre of the shows…at Saint Laurent, we could hear the music, see the models walk the runway, and watch the Eiffel tower sparkle under a white moon. At one point, I had tears in my eyes. There was a lit-up carousel turning next to the stage, as if this wasn’t all enough already!

The Saint Laurent show, Lenny Kravitz, and the Eiffel Tower.

Anna Wintour and Grace Coddington smiled at me. (OK, I never actually could tell with Anna because she wears those dark sunglasses, but when I asked her what she thought of the Nina Ricci show, I saw her smile increase by a millimetre.)

Anna Wintour and Grace Coddington outside the Nina Ricci show.

Patrick Demarchelier walked by us… twice. I took a selfie with Claudia Schiffer. Naomi Campbell and her stallion black hair were next to me as she went through security. Yes, we got slightly trampled by police pushing barricades towards us to make room for Lenny Kravitz because he refused to go in through the front entrance where they had parted the crowd like the red sea, but hey, we survived. We saw Amber Valetta’s fawn-like legs, a shoulder-padded Courtney Love and her daughter, the lithe Chloë Sevigny, the lovely Olivia Polermo and all the bloggers who make a killing changing the fashion game. Then we would go for a celebratory glass of champagne at our favorite café, or drink too much rosé on the Seine. We exhausted ourselves, and yet woke up every morning ready to go again. Pass the café au lait!

What happens during a Parisian strike and Balmain pre- and post-show when Claudia Schiffer shows up.

I once had a vivid dream that I was photographing Claudia Schiffer as she sat on a moss-covered rock in misty Ireland with my Hasselblad camera. I could only ever afford to rent one. That’s how enthralled I was. Seeing her arrive amidst the madness of a Parisian strike and the Balmain pre-show was surreal and a thrill for my inner teenager.

I think my inner fifteen-year-old was the one running the show last week. I felt like a kid brought to a candy store for the first time.

Maybe that was my biggest joy, being reunited with the kid in me. A very young person full of hope and dreams, fulfilling her fantasies while being an adult living in this crazy world. We don’t often get to be in that bubble. I had a week of daily thrills; seeing the legends, the stars, and the fashion, which to me is art, up close. And I got to snap it, and pretend to keep it all.

The Isabel Marant show by night, the best sparkling accessories, and a good night from Sofia Sanchez de Betak.

Thank you to Suzanne Bateman for sharing the dream and to our supportive husbands who took care of business while we ran wild. Thank you to our friends who put us up so generously. J, you are a prince among men. 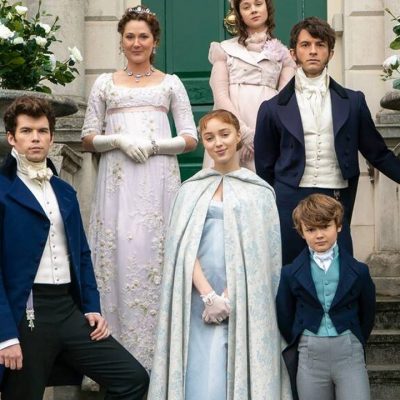 BRIDGERTON IS SPRINGING US FORWARD

Don’t Call it a Throwback: 5 Iconic Mitsou Looks to Revamp in 2021