It’s a cold winter night. I hop out of my Uber and pray that I don’t slip on the ice. I walk up the stairs of the looming historic building. I cross the threshold, and am greeted by dance music, beating like my excited heart.

I enter the domed Maison Principale, and am immediately struck by its grandeur. The modernized church dazzles. Fifteen sparkling chandeliers decorate the 42-foot-high ceilings, and the projector beams Geena Davis’s name in giant letters. I get butterflies. We are in the same place, at the same time.

I take a seat and grab my gifted copy of her new memoir Dying of Politeness and take a selfie with it. I’ve already read the book. I flew through it in an afternoon.

From Awkward Girl to Change-Maker

Known for her iconic roles in Thelma & Louise and A League of Their Own, Geena Davis admits that she didn’t become a bad-ass until she played one in the movies. She shares how the strong female characters she played throughout her career taught her to find her voice.

Her evolution from an awkward girl constantly told she’d fit in better if she took up less space, to Oscar-winning actor, and ultimately to a Hollywood-changing feminist and founder of the Geena Davis Institute on Gender in Media, makes for an unputdownable page-turner.

Her salty sense of self-deprecating humour is delightful. I laughed out loud several times. I had tears in my eyes by the end. She has led a triumphant life.

I highly recommend reading the book as you set your intentions for 2023. If you want to be bold, Geena’s evolution will inspire you. She shares the abuse that Bill Murray put her through. That she said nothing at the time is part of her journey through years of therapy to find her voice and speak up. When faced with ageism in her 40’s, she refocused her attention to archery and became an Olympic semi-finalist. She shares her struggle with ADHD. Upon becoming a mother, she decided to change Hollywood.

Geena has been honored with an Oscar, an Emmy and been featured in the eye-opening documentary This Changes Everything, because of her impact. 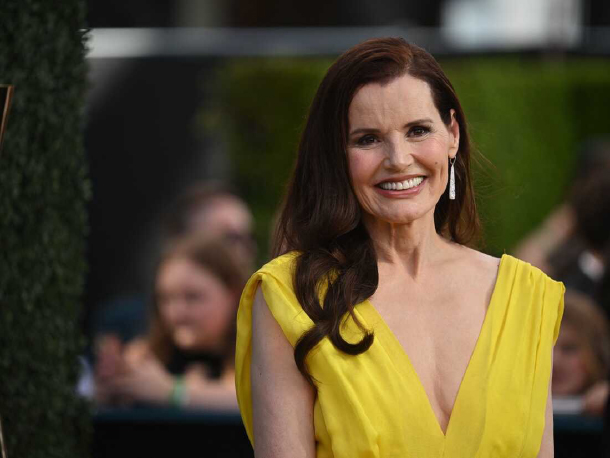 Geena became a mother at 46. Don’t ask her how. In her book she hints that she’d like people to stay out of her vagina. I think that’s a fair ask.

When Geena was watching television with her daughter, she started noticing that most of the main characters in the cartoons were boys. She asked her mom friends if they noticed. None of them had. Geena started asking studio executives if they noticed the gender disparity. They all replied “No, no, that’s been fixed.”

Geena realized that “People who make television and movies for children, love children. If they don’t see the lack of female representation, it’s because of an unconscious bias.”

So, in 2004, Geena personally sponsored Hollywood’s largest study on gender representation in children’s television and movies. A self-described “data geek”, Geena took her data to the same executives at studios like Disney and Pixar, and their jaws dropped to the floor when they saw the facts.

The Geena Davis Institute has a mantra: “If she can see it, she can be it.” Geena believes that if girls see themselves represented onscreen doing all the interesting things that boys can do, it changes how they see themselves. It changes the future.

The lights dim. The room is filled with women who work in the media. Directors, producers, actors, writers and leaders of organizations like ACTRA. We are all here to see the woman who is changing the landscape of film and television.

Geena walks by us and takes the stage with host Natasha Gargiulo.

Geena is wearing glistening earrings, a long dress in Pantone’s 2023 color of the year – Viva Magenta, and dazzling kitten heels. She is 66. She oozes glamour, and a charming humility. Though she stands 6-feet tall, she has a slight stoop, like she’s been trying to hide her whole life.

Once the clapping dies down, Geena quips, “I’m still the same girl from a small town. Don’t let the limousine and motorcade fool you.” Then she mock laughs at herself, before we’ve had time to metabolize the joke. 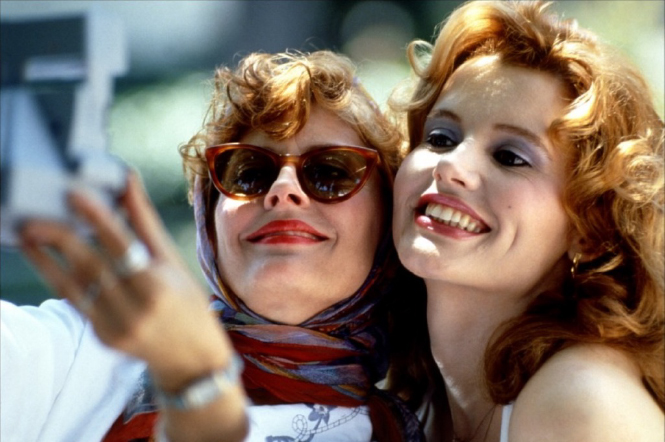 A huge photo of Thelma & Louise takes over the screen beside the stage and we all clap. A few people shout in excitement. Geena shares how working with Susan Sarandon changed her.

In preparation for her first meeting on the set of Thelma & Louise with Ridley Scott and Susan Sarandon, Geena agonized over how to give feedback on the script, without – God forbid – offending them.

When Susan Sarandon sat down at the table she said to Ridley, “I think we should cut my first line.” Geena was gobsmacked. She had never seen a woman this self-possessed before, who spoke her mind without apologizing.

“I basically became a puppy dog and followed her around,” she tells us. The two remain close, and yes – they hope to work together again. Fingers crossed. 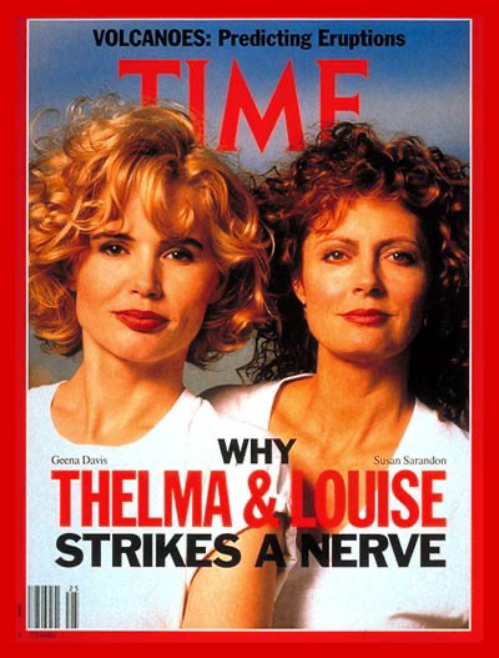 The two ended up on the cover of Time magazine after the movie Thelma & Louise struck such a nerve. Geena remembers women cheering in theatres when the two drove their convertible off the cliff.

“I hope that’s not a spoiler alert,” she jokes.

“No, I think they’ve seen it” confirms Natasha. Everyone chuckles.

“Women so rarely get to feel that way when they exit the theatre, that sense of triumph, that men get to feel all the time. We were taking control of our future.”

Natasha asks Geena about the ageism she faced when the acting roles stopped coming in during her 40’s.

“I didn’t think it would happen to me, but it did. I have a theory about that. Once women stop being the love interest, the default in a director’s mind for roles, is men. But that’s changing. I’m optimistic.”

Natasha opens the floor to questions. Many hands fly up. Geena is asked for an update on the Institute.

Without fail, it’s clear that every person who asks a question either congratulates her for her work, or is asking for advice on how to keep going when faced with discrimination.

“It’s changing,” Geena says. “I remember when a Pixar executive asked for my opinion of Monsters University. I watched the crowd scenes and immediately saw that the gender split was 50/50! The fraternities were present, but the sororities made up 50 percent of the background characters. She smiles proudly. “Hot dog! That’s what we want to see!”

The Work Is Not Done.

The Geena Davis Institute partners with organizations globally to foster inclusion and eliminate harmful stereotypes in Global Media. Their mantra is now “If they can see it, they can be it.”

Everyone wants to talk to her, to ask her advice, to share that their organization follows what her institute does very closely. Her work has evolved her into a movement. And somehow, she remains grounded.

As she walks offstage, everyone stands to applaud and take her picture. As she walks by me and smiles, I feel a wave emotion. A lump in my throat. I feel overcome by an adrenaline high. I feel flush with a new sense of possibility.

Follow the Geena Davis Institute on Gender in Media here. 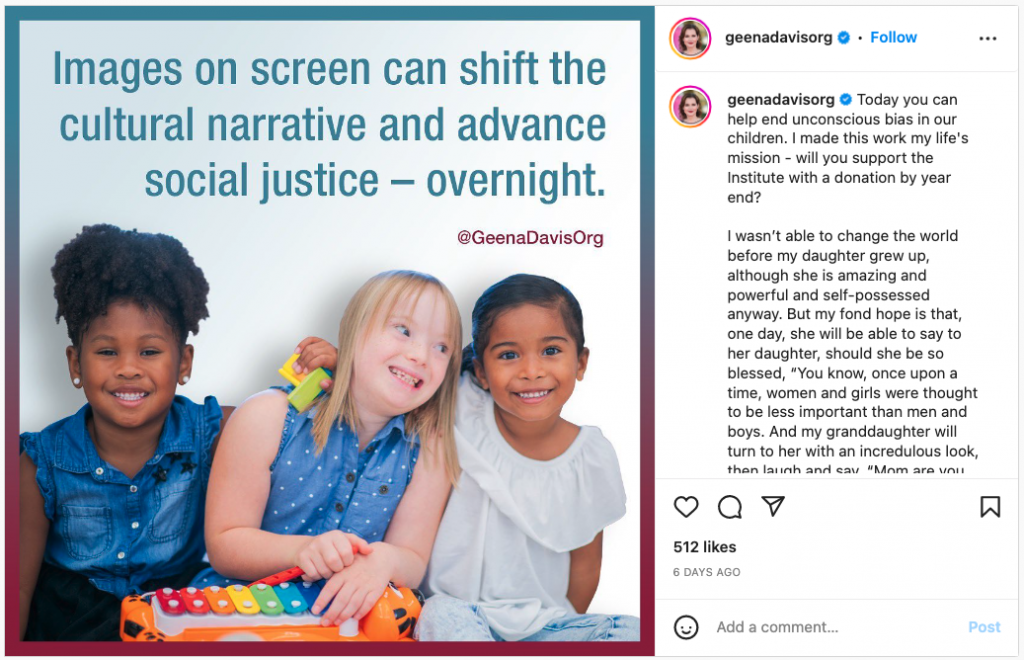