Many women find themselves at 50 asking what they should be doing with the second half of their lives. For Nannette de Gaspé Beaubien, the answer can be described in one verb: start up. Once a Corporate Banker and mother, she decided to face her fears and launch her own business at this turning point in her life, in the world of beauty. After discovering a revolutionary technology created by two young women from Quebec, Karine Théberge and Isabelle Goudreault, she founded the brand Nannette de Gaspé in May 2016.

In less than a year the masks dry to the touch but oh! how they hydrate the eyes, face, neck, and hands are distributed by Selfridges of London, Colette of Paris, Barney’s New York, and Holt Renfrew in Canada. What a success story!

On top of that, after the masks received rave reviews from Vogue, Allure and Harper’s Bazaar, the Queen was gifted the masks for her 90th birthday (straight from Cara Delevingne’s mother no less), and Kate Moss has become a loyal fan.

Nannette accepted my invitation to come to my home to discuss women and entrepreneurship, facing fears, and the advice she received from her father in law, Phillip II de Gaspé Beaubien, that changed the course of her life. 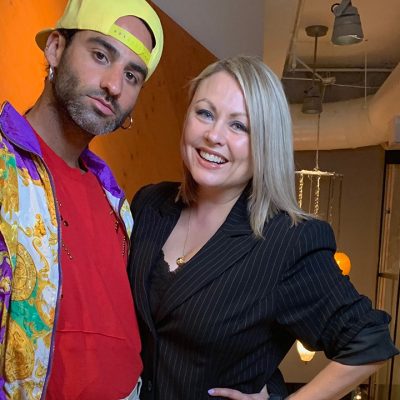 Nannette de Gaspé Beaubien: How to Start Up the Second Half of Your Life.