Last night at the Bell Centre, Oprah Winfrey gave her talk, Your Path Made Clear. Mitsou and I had what was probably the perfect girls night out, with quite a few attendees. It’s Oprah! The television host (#1 still, after 25 years), president of her own television network, founder and editor of her own magazine, critically acclaimed actress, etc.

As a yoga professor, I was particularly excited to see Oprah live. I’ve read the book that inspired her speaking tour — The Path Made Clear — and appreciated how she made her spiritual teachings so accessible.

We’ve decided to share our experience in three texted acts: before, during and after the conference. 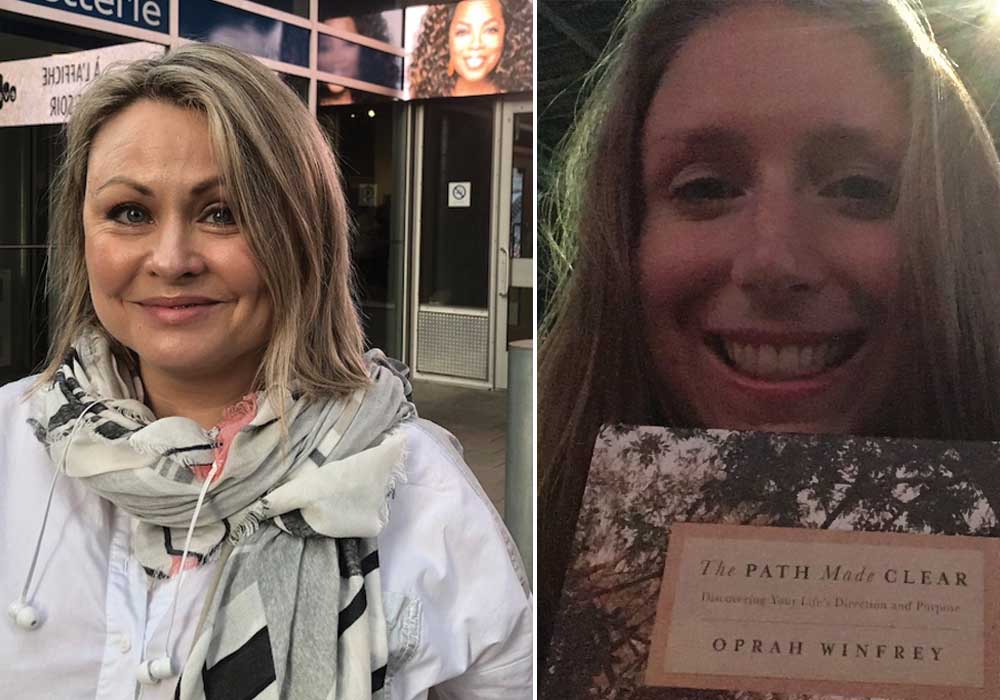 Hey! I’m going to be at the box office for 7. I’m so excited. I’m ready to scream and jump!

Audrey: Hey! I’m going to be at the box office for 7. I’m so excited. I’m ready to scream and jump! 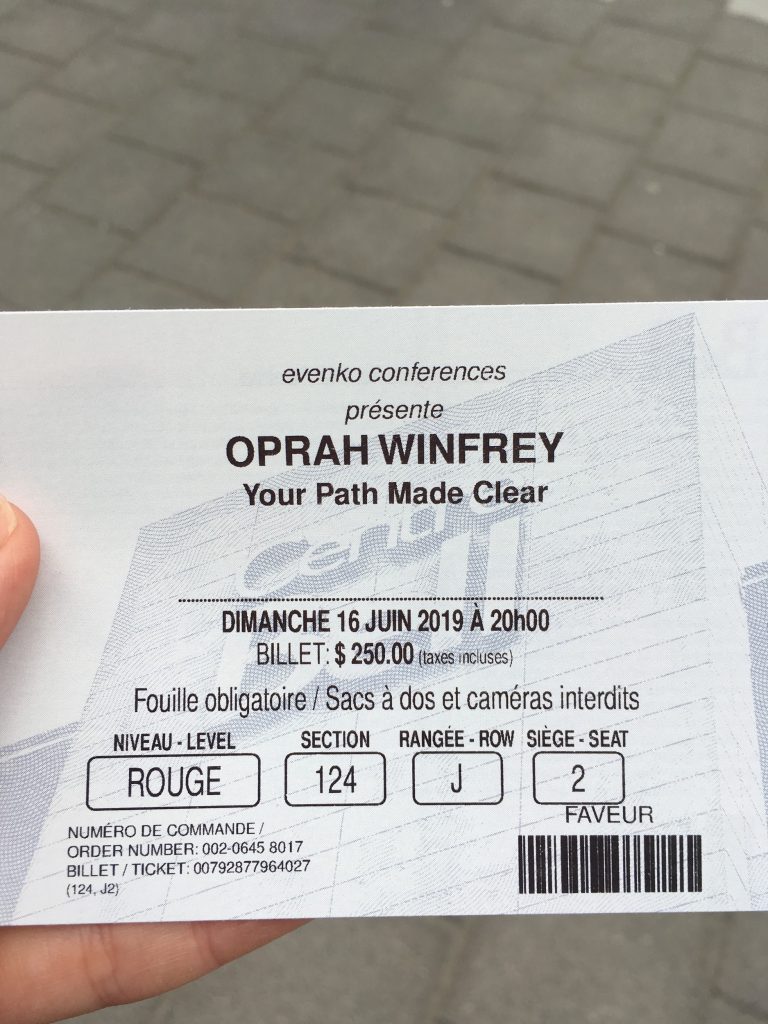 Mitsou: I don’t need anything other than the tickets, some tissues, a lip gloss, and my cell phone! Let’s just say I’m pretty nervous, just as much as the last time she was in Montreal! I introduced her! 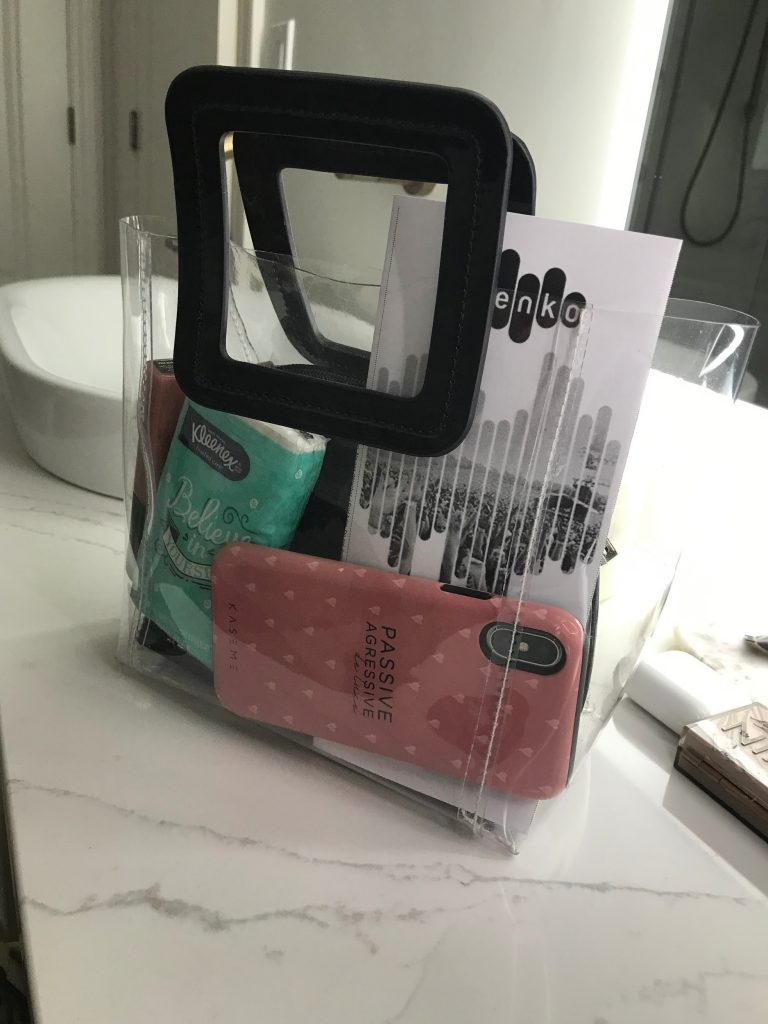 Audrey : That’s still so epic. I’m packing preventative tissues and a new lipstick. Hot pink, even. I wonder if I’m the only one who feels like a teenager going to see her favourite boy band…

Audrey: It’s a melting pot of all sorts of lessons she’s learned from spiritual leaders, specifically on the link between clarifying your life path.

Mitsou: Do you find it’s helped you rewire your thinking? I’m not quite there anymore…

Audrey:I’m reconnecting to it now. I changed my perspective on the values of the lessons, on what was shared. It’s hot and inspiring, but in the end, we have to find what resonates with us and not take everything on good faith. I realise that these people have carved their own paths. The value in what they share relies on their ability to integrate that with humanity.

The book is cool. At the same time, if you follow Oprah and watch excerpts of her interviews on Youtube, there’s a lot of material already at your disposal. I’m really curious to see how she’ll deal with the mainstream conversation on spirituality. This is a good challenge because even if the subject matter is noble and deep, she still needs to be accessible to her wider audience with the mediums that she uses. She needs to sell this to a larger crowd.

Mitsou:I’m in the cab on the way to the Bell Centre. Funnily enough, the cab driver doesn’t know who Oprah Winfrey is. He thinks I’m going to the opera! He was telling me how he’s from Tunisia, he’s a new dad and therefore doesn’t have enough time to watch tv. I explained that she’s the biggest tv star in the world. He was surprised!

Audrey: Even when you’re Oprah, you still have more people to touch. Imagine that!

Mitsou:When Oprah goes to Starbucks, how many times do you think the young baristas ask her how to spell her name?

Audrey: I hope that happens to her! Humility is a good thing. I’d love to be there just to laugh. Does that happen to you? That younger people ask for your name? Do they spell it correctly?

Mitsou:Yes, it happens! Sometimes they’re like “What? I didn’t hear that! Can you spell that for me?”

Audrey:That’s funny! Some spectators are coming with popcorn and beer. It’s still a show to them. What I really want to know is how many people who watch Oprah apply her spiritual lessons to their own lives. Because from my personal experience, its work that requires discipline and daily practice.

Mitsou:I’m here. The line in front of the Bell Centre…is crazy! 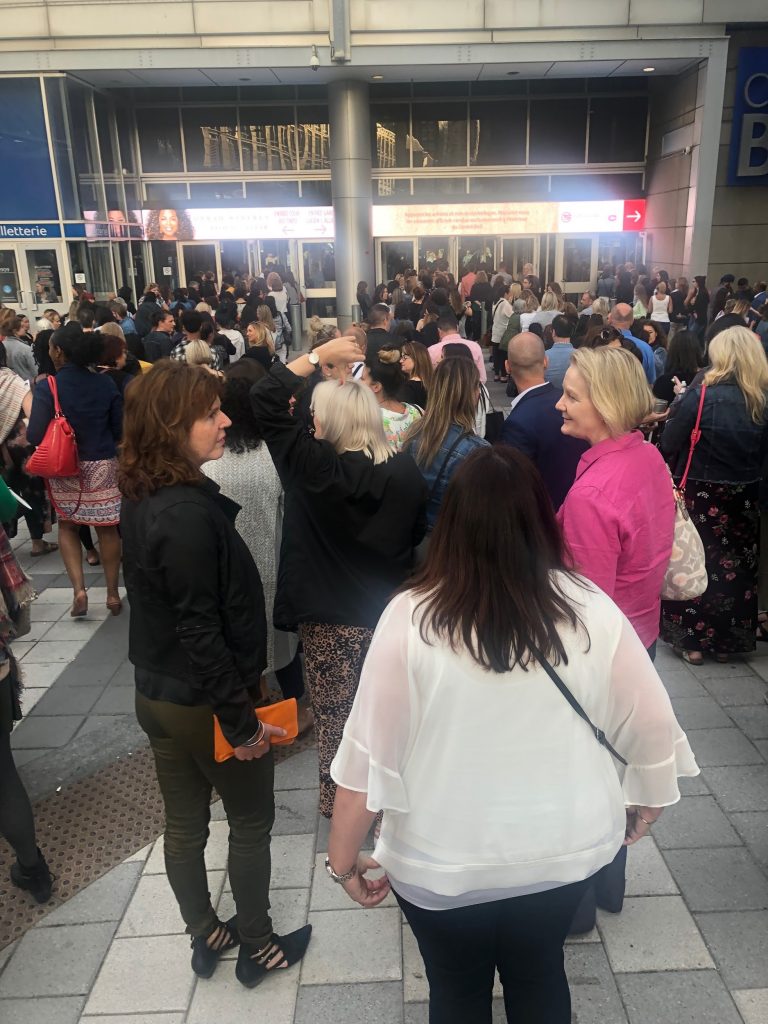 Mitsou: Ok! I’m seated! There are so many people here! 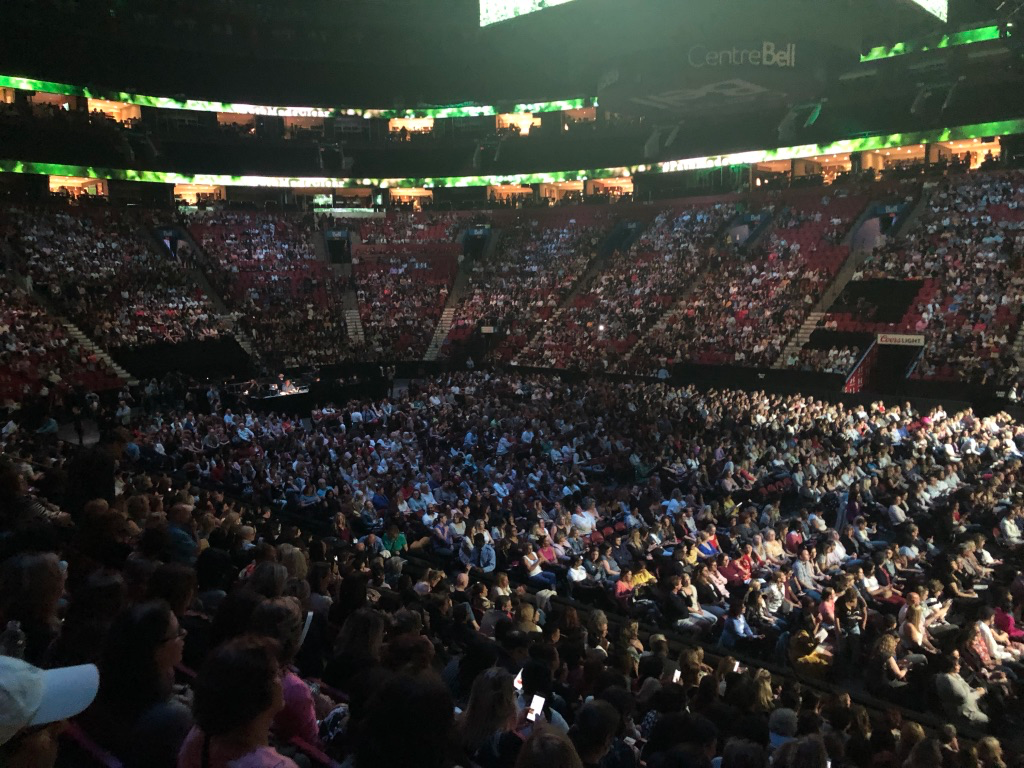 Audrey: Here we go! We’re starting with a recap of her life and career.

Mitsou: Wow, the video introduction where she says that her grandmother had just one dream for her: that she would become a cleaning lady.

Audrey: And today, she’s arrived like a rock star. Still! ?

Mitsou: Oof! I was scared…I thought she was mistook where she was when she showed up with her Toronto jersey, but I just learned that it’s to celebrate the Raptors victory! She took it off early on to show her beautiful blue dress, silver shoes and glasses that are just insane! It’s wild! Oprah has everything except an optician to adjust her nose pads. She won’t stop pushing her glasses up! I want to help her!

Audrey: So good: “The process is that path.” It’s just a question of perspective. I love it. She’s so right! Should we discuss our favourite quotes from the show?

There is a hashtag for her conference. It’s #pathmadeclear. Or, “An ‘AHA’ is a remembering of what you already knew…”

Tell me what you’re planning with your previous life?
Your life is yours to design
When she talked about being present, that must have resonated with you as a yoga teacher?

Audrey: Yes! That’s the key. It was perfect that she kept emphasizing this. Also, her talk was both humorous and touching. A kind of spiritual stand-up!

Mitsou: There we go! The moment of connecting with the public. Janet Jackson and Britney Spears make men join them onstage for a lap dance. Oprah brings up Valérie Kamel, a young teacher from Pierrefonds, to tell her that she’s visiting HER school tomorrow night. Even if the kids have exams!

Mitsou: Everyone has their own purpose and can’t control anyone else’s… She has the same problem that I have. Her husband, Stedman Graham, doesn’t believe in closing any parts off!

Audrey: Interesting that she brings this up: we attract the energy and people who bring out our wounds so we can heal them. We heal them faster when we expose ourselves to other people rather than when we’re alone, that’s for sure!

Audrey: Holy s…! Iyanla Vanzant is her special guest! It’s one of the stars of her networks. These two share such a history with each other, but we’ll talk showbiz another time…

Mitsou: Ok! We’ll stop texting and pick up after the show!

Texts from the end of the night

Audrey: Wow! What a Conference! She’s already known as a cool woman with a spiritual service plan. I like the idea of a clear plan of action to lead a spiritual life. That’s what’s missing, most of the time: to take time to act consciously for your well-being. I’ve got plenty! Post-its or screenshots on my phone to remind me of my intentions. I call this my cosmic homework. Then there are the reminders: be present, relax the body, feel all sensations, emotions…In fact, I turn to these reminders when things get tough, it’s alright anchored within. And what about you? Do you have a daily spiritual plan to fall back on during tough times?

Mitsou: When things are going so well, my first instinct is to lie down on the floor. Even in the radio booth sometimes! For me, it’s a great instinct, for you, as a yoga teacher, it’s the savasana pose. In fact, I’m grounding myself. I feel supported by the ground. This takes me away from my anxiety attacks, stress or moment of grief.

Audrey: Cool. It’s a perfect trick. I am more interested in the ones I could hear. My real curiosity was whether she could surpass the mainstream spirituality talk, and it worked even if it was still very showbizz-like with the music and light sequence.

She addresses the crux of every issue, which is that path = process. It takes time and it comes in ups and downs. The difficult parts of the game and our perception of it change how we’re going to succeed and align with our life’s purpose.

I’ve already ignored this last piece of advice the last few times, and I need to listen more!

Mitsou:I liked this more than I thought I would. I feel like she’s gained so much more maturity. You see, I found this less showbizz like since her last talk (apart from the Weight Watchers plug, which I felt was a little misplaced). There are so many stories I’d love to hear again. What I appreciated the most is that even if the stories were very personal, we could all mine a bit of our own truth from them.

Her own heartache, the forgiveness she sought from her mother, the sexual abuse she endured, and even telling her father that she couldn’t visit him anymore if he still hosting the man who assaulted her. (I still can’t believe that she found with the man in the kitchen, and felt obligated to cook him eggs!)

What I’ve retained is to trust your gut early on, especially when it’s just a faint whisper. Even if I’ve heard this countless times, the way Oprah explains it clicked for me tonight. The fact that you can discover your vocation, your reason for being. I love “an ‘AHA’ is a remembering of what you already knew…”

I wanted to go a little deeper in this direction because it’s funny, I have a personal project that I’m working on over the summer and that I was chipping away at very slowly. Tonight, I see it as way more than just some project.

Get home safely, my dear!

Audrey: I’m so on board with you (re: the Weight Watchers plug…such a mood killer). I’m working on something too. Thank you for the lovely exchange. Xx

You’re gonna laugh: my taxi driver doesn’t know who Oprah is either!