Ever since my hubby returned from Los Angeles, he kept telling me about Sugarfish on North Canon Drive in Beverly Hills, an unusual sushi restaurant that is not just a favorite of my hubby! 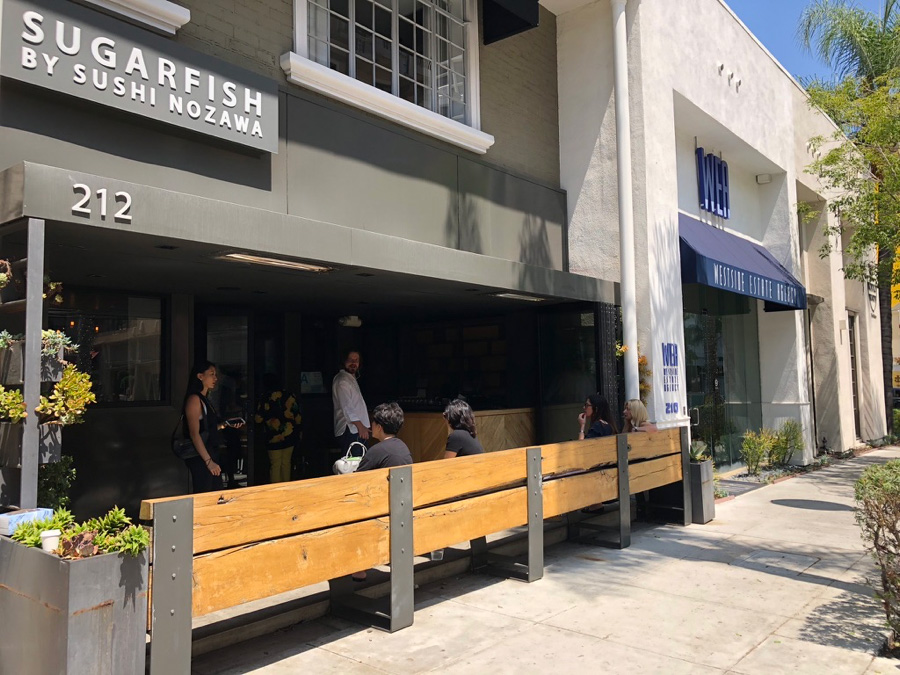 PK Subban arrived at 4:32PM with his (tall) blonde skier girlfriend Lindsey Vonn after the Nickelodeon Kids Choice Sports Awards on July 19th as we were finishing our meal. The lovers were celebrating their first anniversary since they met at that same gala the year before.

I got a huge smile from our favorite hockey player. “Hey Mitsou! How are you????” from the man I sang Bye Bye my P.K. sniff … re-snif …. when he was transferred to Nashville … Even though the man is on vacation for the summer, I can confirm from my hug that he has not stopped training! Beautiful, clean, divinely perfumed (that’s for you girls), once again dressed like he stepped out of a magazine with his hat, his immaculate white t-shirt, his designer jeans and his beige suede cowboy boots; our PK is better than ever. It must be said that the bar is high! His new girlfriend is none other than one of the world’s best-known winter sports athletes, the 33-year-old Lindsey Vonn, who was a gold medalist in our country at the Vancouver 2010 Games. With her many sponsors and her own clothing collection, her value is unrivaled in the world of women’s skiing.

Let me tell you that Lindsey was not in her ski suit in Los Angeles that day! Considering her 5 feet 10-inch height, and her platform shoes, the impressive woman (in every sense) had opted instead for a glittery multi-colored jumpsuit from designer Jovani Halterneck, chosen by Monica Rose, stylist to stars like Chrissy Tiegen and John Legend.

So much fun at the Kids Choice Sports Awards tonight! Thank you so much for voting, it’s amazing to win another blimp because of my amazing fans! Thanks @romanreignsofficial for letting me beat you in the tissue paper contest… bucket list item right there ☑️? time to sleep and get ready for another day of training tomorrow! #thankyou @kidschoicenick @smac_entertainment watch tonight at 8/7c!!!

We talked about Montreal: yes, he misses it and yes, he sends you all kisses. Lindsey has great memories of Quebec’s mountains, including Tremblant where she went skiing with her dad when she was young. We also discussed … dessert! I was looking for the best place to eat a gelato, but Lindsey told me she preferred froyo. What is froyo? Ah yes … It’s frozen yogurt which has less calories than ice-cream. I should have known that I would not get recommendations for sweets from an athlete.

The couple is back from a vacation in Mykonos where he met up with another great Canadian, Mitch Garber, and his wife Anne-Marie Boucher.

The lovers had fun doing a swimsuit competition. Who do think wore it best?

Who wore it better? #happy4thofjuly

The couple just graced the cover of the Sports Illustrated fashion edition. The Perfect Match, which came out in July. We hope that the relationship is sustainable, despite the pressure that the two athletes will have next winter!

P.K. will be with us on August 30th to attend his fundraising gala for the Montreal Children’s Hospital.

Will his beautiful blonde join him in The Canadians’ hometown? It would seem no, because she will be training in Chile, but we never know!

Sushi with P.K. Subban and Lindsey